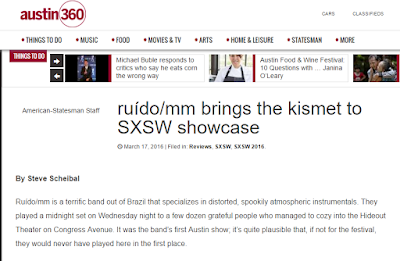 "ruído/mm is a terrific band out of Brazil that specializes in distorted, spookily atmospheric instrumentals. They played a midnight set on Wednesday night to a few dozen grateful people who managed to cozy into the Hideout Theater on Congress Avenue. It was the band’s first Austin show; it’s quite plausible that, if not for the festival, they would never have played here in the first place.

In the absence of a singer, ruído/mm (the name roughly translates to “noise per milimeter,” a made-up measurement) is fronted by three guitarists whose licks swirl around each other without ever colliding. The members seem to delight both in seeing how powerful power chords can be, and in coaxing odd noises out of their instruments and then building coherent songs around them. It’s a big sound — much bigger than the Hideout, which was dwarfed by it.

On record, the band’s slow progressions and quirky key changes draw apt comparisons to spaghetti western soundtracks. On Wednesday, they brought an energy that lit up their roots. Several songs played like souped up Bossa Nova tunes, slipping with languid grace into new and unexpected keys, distortion and all.

By the end, it all felt like kismet. The audience was grateful for the performance, and the band returned the gratitude. Who knows whether ruído/mm will ever be back in Austin for another show. But at least we got this one.

For that, South by Southwest, we thank you." 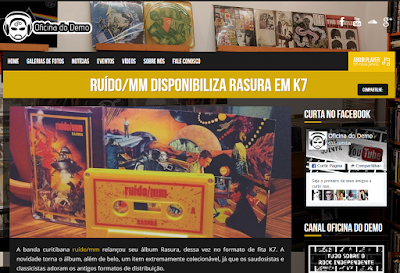 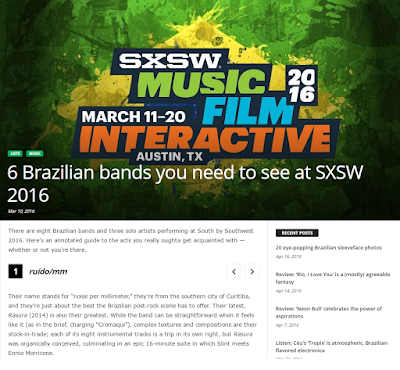 " #1 ruído/mm
Their name stands for “noise per millimeter,” they’re from the southern city of Curitiba, and they’re just about the best the Brazilian post-rock scene has to offer. Their latest, Rasura (2014) is also their greatest. While the band can be straightforward when it feels like it (as in the brief, charging “Cromaqui”), complex textures and compositions are their stock-in-trade; each of its eight instrumental tracks is a trip in its own right, but Rasura was organically conceived, culminating in an epic 16-minute suite in which Slint meets Ennio Morricone."